You can’t make everyone happy.  But, a poorly handled situation can make the situation exponentially worse.

A business owner must learn how to respond to upset customers.  They must appear human, be transparent, and make an effort to resolve the issue.

Imagine Vegan Cafe in Memphis, TN did not do this, period.  Imagine has received a considerable amount of negative press lately, because the owner called out a customer by name over a negative review – a review that might seem unbelievable to some.  The owner, instead of addressing the concerns of the customer, took it as a personal attack on her and her children.

The complaint? The owner’s baby was running around naked in the restaurant, got up on a table and ended up showing off her backside.  Another child was said to be singing and staring at the customer.  The owner unapologetically called out the customer on Facebook, and told her she was not welcome in the restaurant. A barrage of negative ratings and comments ensued, as folks weighed in on the idea of a naked child running around while folks were eating.  One comment declared that the child defecated on the floor of the restaurant.  (We should note that, as of this writing, the Imagine Vegan Facebook page, along with its comments, has been removed.

The owner denies the accusations, apparently.  A story that appeared on tv station WREG, quotes the owner saying, “This one (negative review) particularly struck a chord because I don’t like people spreading lies about my children,”  If the incident is false, that is a pretty big lie for a customer to be spreading via Facebook.  If the review has some truth to it though, perhaps the owner should do a better job of correcting the customer’s negative experience.

Bottom line, it is about customer service.  And, in a negative situation, you’d better be prepared to offer some resolution, regardless of what you think of that customer.  When a business receives a negative review, it is essential to reach out and do whatever you can to make that person content with their experience. There is an old saying that “the customer is always right.”  Granted, while some customers will push you to the limits and be completely unreasonable, you had better be prepared to show online your attempts to take care of the problem. 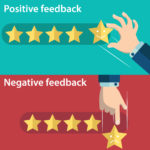 For many small business owners, they work hard, and home and business life are intertwined.  Many marketing companies offer a social media and online management service.  (We at Quartzlight offer this service)  The advantage for a business owner here is that a third party, with your business’ best interest in mind, can perhaps better objectively answer the negative complaint and work on a resolution.  Once the issue or complaint is resolved, the customer may be asked to update their review to a positive one, or edit it to tell what steps had been made by the business.

Negative reviews are bound to happen sooner or later.  And, it is so important that the business, and business owners, have a plan in place to deal with it.